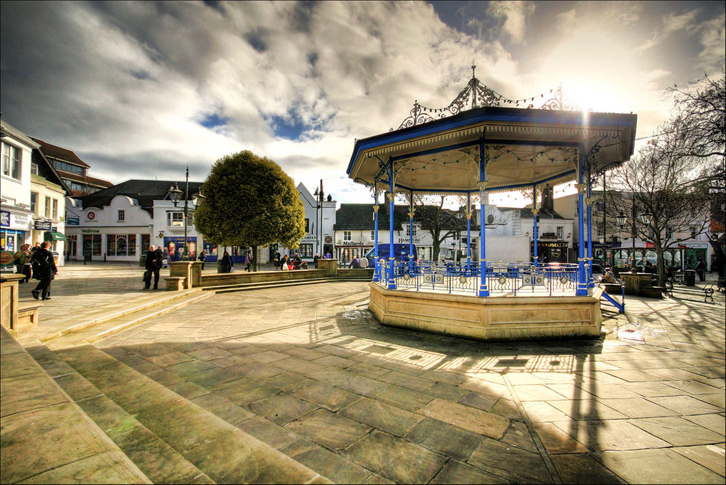 Horsham is a bustling market town of around 60,000 people with it’s origins in the 7th century when the local horse traders so named it Horse Ham (meaning a place where horses meet). The town has grown up around the Carfax, which is a open market square and the meeting place of four roads. South of the Carfax is the Causeway where you will find the Horsham Museum and a series of listed buildings and houses erected in the 17th, 18th and early 19th century.  At the southern end of the Causeway is the magnificent St Marys Church built by the Normans, rebuilt in the 13th century and restored around 1865.

The market town feel has been really well preserved and the village green, now paved and pedestrianised into the Carfax hosts a local traders market on Thursdays and Sundays and themed events throughout the year. This central hub has invited a wonderful selection of coffee shops and restaurants with al-fresco seating proving a hit (weather permitting!)

Todays shoppers demand modern facilities with plenty of choice. Horsham provides this, not in one giant complex but in a series of smaller shopping satellites such as Swan Walk, Piries Place, the Forum and the soon to be completed John Lewis Centre. Its a great place to shop with plentiful parking, a wide choice and never any feeling of being over crowded.

Recently Horsham was voted as one of the best places to live in the UK by measuring and comparing a series of “quality of life” indicators including quality of schools, low crime statistics, commuting distance, house price to earnings ratio, access to countryside, leisure facilities etc. It is indeed a very nice place to live with good commuting links, access to main motorways, 20 minutes from Gatwick Airport and a fast rail link to London and the South Coast. There is a good supply of quality housing with house prices kept low through a significant number of new build estates currently under construction in and around the area.

Horsham is served by three train stations: Horsham, Littlehaven and Christ’s Hospital.  It has direct connections to:

Horsham is 12 miles from Gatwick Airport – the UK’s second busiest airport. Fortunately no part of Horsham town is underneath a regular flight path.

Horsham is the junction for three major routes in Sussex

Cyclists, pedestrians and horseriders can reach Guildford and Shoreham via the Downs Link, a long distance bridleway and cycle route which follows the now disused Horsham-Guildford, and Horsham-Shoreham railway lines and passes through Southwater,  just to the south of Horsham

Horsham’s town centre has undergone many improvements over the last few years and now has many first class developments to shop and relax, these include: